Michel Riis got in contact from Denmark with these superb photos of the bike at the centre of his ambitious electric speedway project, and video in which a former world speedway champion gives the bike huge praise. Michel is the co-founder of Switch motorcycles and designed the Switch eSCRAMBLER. He is a former speedway rider and now motorcycle designer who used to work at Yamaha motors in Japan. This is what he says about project. 'I have a huge love for speedway and some

Ray Tauscher (Tauser in the international press) is America's forgotten world champion. In the years between the wars he left his home in Portland, OR, to race speedway in Australia and Europe winning the major races, including a world championship. Portland filmmakers Ned and Michael Thanhouser heard the story of the late racer, found recently discovered footage they say is of Ray at his height, and gained permission from his surviving family to scour his scrapbooks to form

Because every DTRA race event has been cancelled this year, and I couldn't/didn't want to travel out of the country to race, this year's dirt track riding had been limited to a couple of practice days at Greenfield. When the DTRA's Amman Valley round was cancelled at the last minute (due to you know what) a few UK riders committed to going to Krowdrace at Parchim in East Germany. I was told about the chance to race a lot closer to home, at a small meeting shared with a speedw 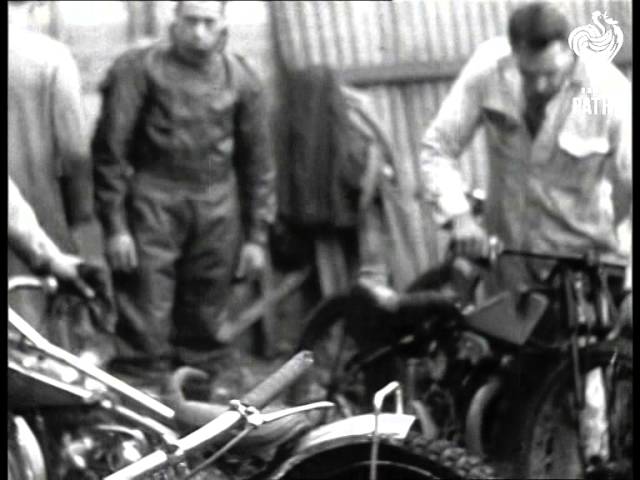 'Normal peace-time jobs seem a bit slow...' Dirt track/speedway from 1946, immediately post-war. Lots of handsome JAP speedway iron and girder forks being ridden by former military despatch riders. This news 'feature' was filmed to be shown in British cinemas among the news and other entertainment features of the week and before a feature film. Next to no one would have a TV set, so this was the only way to see 'moving' news. The action takes place at Rye House, a track nort
1
234
bottom of page