American Flat Track are filling in the gaps of their rescheduled 2020 season and more details have been released. When AFT announced their post-Covid 2020 season there were three TBC dates. The first of those has been confirmed: the Texas double-header, the Dallas Half-Mile I and II is going to be held at the Devil's Bowl in Mesquite, reportedly 20 minutes from downtown Dallas, so it's in keeping with AFT's desire to have more races near major cities to draw new fans out. ' 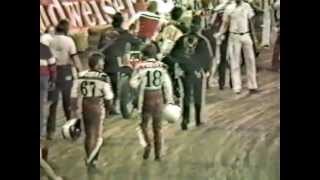 This amateur film from the 1983 GNC season opener is something else. It was filmed by a friend or family member of local Texan Terry Poovey. Poovey was national number 18 from 1977 to 2007! The factory Honda rider, Poovey is the star of the show and his ride in the main has to be seen to be believed. The film shows his qualifying race, a semi, I think, for the main. Back then the classes were stacked with talent. In Poovey's qualifier is Kenny Roberts, a rider many regards as

I had seen this recent Texas Half-Mile crash on Instagram, but couldn't find a version I could post on the blog until I looked again today. It's worth posting for those who limit their social media intake to just the Sideburn blog. The surface at the Forth Worth track sounded like it was causing problems for some riders. Brad Baker crashed out in the heats, but was discharged from hospital later the same weekend, Sandriana Shipman had a ugly crash in the Singles class and nee
1
2
bottom of page