Europe's biggest flat track race has been cancelled with less than six weeks until the event. An official press release explained that the organisers hadn't had enough confirmations from the high profile 'charismatic' MotoGP riders they felt they needed to make the event viable and 'respect their racing fans'. This is despite it being a Dorna-backed event, the company that runs MotoGP and owns all its rights. The lack of bankable talent would also have a massive impact on tic 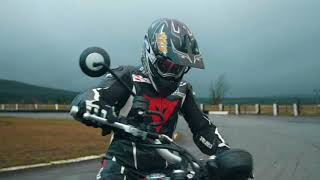 After spannering himself at DirtQuake VI in King's Lynn this year, Carl Fogarty shows that he hasn't lost the flat track bug in this official Triumph promo. British speedway tracks are hideous when the are wet, so Foggy is showing great control (no surprise) to make handling that heavy Scrambler look quite effortless in slick conditions. Can we expect a Foggy comeback for DirtQuake 2018? #CarlFogarty #Triumph #Buxton #RoadRacersDoingFlatTrack

Photo: Steve English With Marquez (and his hot rod HRC Honda) out of contention, Brad Baker out after surgery and Jared Mees missing the race, presumably because of his new baby and incredible championship winning year, the Superprestigio was more open than it had been for some time. The Superprestigio is a pure short track shitfight, with the added complication of 17in tyres (because Michelin sponsor and don't make a 19) and an MX-style start gate. The British challenge fizz

What was regarded as the biggest flat track race in the world is in danger of fizzling out. The format, that was exciting when launched (or relaunched) in 2014, now seems tired. Same venue, same commentator, same invited riders (on the whole). This will be the fifth in four years and rumours we hear say it's going to take an indefinite break. If you haven't been, it's worth seeing. We have been a couple of times and we're not in a rush to return. Brad Baker, who has been invi
1
23