New guest blog from Jason. It’s OK for you fast racers, out in front, where the air is clean and the mud still on the floor, but for me, the air isn’t clean and the mud is doing about 60 miles per hour right at my frontage. Which means after about eight years of losing, sweating, panicking plus a multitude of other emotions expressed, my once pristine Bates leathers are ready for display duties only. I’ve chosen an off the shelf Fuel jacket from Urban Rider. Did I bother to l 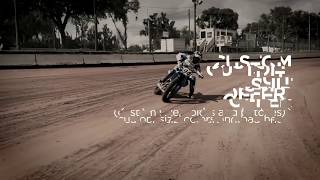 American Flat Track had already announced that it planned to make airbag suits mandatory for its racers from 2020 before a spate of serious injuries blighted the final rounds of the 2019 season. It has been confirmed that all SuperTwins racers (the new name for the Twins class) must wear airbag suits (or, I assume, airbag vests under their own suits, like happens in MotoGP classes). Riders in Production Twins and Singles has 'strongly encouraged' to wear airbag suits. This fi

While preparing the post about Drakey and New Zealand flat track, I combed the old Sideburn blog for a shot of his leathers, and the photo above appeared. It's the Thunderbike podium, from March 2011. Boastie and Jackie (who started the whole UK flat track scene) are on the left. Steve Coles won (riding a mutant Honda 650 Bros twin), that's Drakey in his magnificent leathers and me in third, with an eight-year-old Max in his overalls. To see the whole post and some familiar n 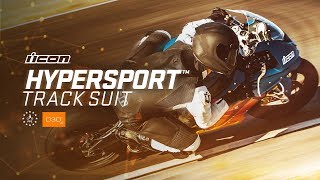 After years of producing motorcycle protective gear (often for people who wouldn't normally wear motorcycle protective gear) Portland-based Icon has finally released a one-piece 'track suit'. It comes in black and white or all black. I've been racing in Icon two-piece leathers or leather/fabric hybrids for five or six seasons now, and I trust them with my own hide. I wear the same AirFrame Pro helmet the rider in this short film does too. Find out more at Icon Motorsports #Ic

I'm trying to declutter my life to some degree. Little by little. God only know why I've held onto these Alpinestars leathers for over ten years since I last raced in them. They as supple as plywood and as inviting as a viper's nest. This week I stripped the patches off them and numbers off the back and finally chucked them. I might get the 13 stitched on the back of an old red Lewis Leathers jacket I bought at the TT years ago. I actually bought it for Derek, at Lewis, knowi

El Solitario are running a design competition to win some custom made leathers, and they make pukka stuff. It's being run though instagram, so you might need to be on that social network to get on the case, but you might be able to find a work around if you're instagramphobic. See the instructions below. #ElSolitario #Leathers

Owned & Ridden By Steve McQueen in the Film On Any Sunday...

Our friend Jason returns to the pages of Sideburn, cementing his position as the person with more bikes featured in Sideburn than any other. This time Jason describes how he ended up owning one of the most famous bikes in cinematic history - Steve McQueen's On any Sunday beach bike. The machine, that was raced at two Snow Quakes, is one of the star lots of Bonham's Barber Museum auction, taking place in Alabama next month. The guide price is $75,000-£100,000 (plus fees). I wo

Running A Marathon With a Stone in Your Shoe

Photo: Nick Clements I've spent a lot of time with John Harrison over the last few years. He's a very latecomer to motorcycle racing, competing for the first time on two wheels, at a DTRA race just three or four years ago, and already into his 50s, and with children older than some of the people he was racing on track. I watch him on track when I can, if I'm not in the holding area for my own heat races, and if I think I can give him pointers, I do, though I'm not expert. Any

Forget Ronaldo joining Juventus, the biggest signing of 2018 is Lewis Leathers' securing a sponsorship deal with Jet Rock legend Guitar Wolf. The London-based manufacturer has been outfitting motorcyclists, aviators and rock and roll stars since 1892, and recently opened a successful store in Harajuku, Japan, so a tie-in with cowhide enthusiast, Guitar Wolf is well timed. I met the company's owner, Derek Harris, at this weekend's Assembly Chopper Show, where I took these hast

I admit I'm still a sucker for some clothing brands, though not in the same way I was as a youth, but the whole Supreme thing has passed me by. I'm too old for it, I reckon... Supreme are a NYC-based skate brand turned super high-end streetwear brand/fashionista favourite, producing, among dozens of other things, skateboard decks with artwork created for them by artists the level of Jeff Koons. Many of their products sell out very quickly, inspiring people to camp out for day
{"items":["605f8551d30e5200417fe602","5dfa60fc50440700175e1705","5dfa6100c6994d0017ec79cd","5dfa6102bc684b00172c8b7e","5dfa6106f4278000176ac70d","5dfa610594ad8200175608e8","5dfa61088ea4c4001746e493","5dfa6108c66c9c00176b73ce","5dfa61098ea4c4001746e496","5dfa6111a459e10017fcc2f9"],"styles":{"galleryType":"Columns","groupSize":1,"showArrows":true,"cubeImages":true,"cubeType":"fill","cubeRatio":1.3333333333333333,"isVertical":true,"gallerySize":30,"collageAmount":0,"collageDensity":0,"groupTypes":"1","oneRow":false,"imageMargin":32,"galleryMargin":0,"scatter":0,"rotatingScatter":"","chooseBestGroup":true,"smartCrop":false,"hasThumbnails":false,"enableScroll":true,"isGrid":true,"isSlider":false,"isColumns":false,"isSlideshow":false,"cropOnlyFill":false,"fixedColumns":1,"enableInfiniteScroll":true,"isRTL":false,"minItemSize":50,"rotatingGroupTypes":"","rotatingCropRatios":"","columnWidths":"","gallerySliderImageRatio":1.7777777777777777,"numberOfImagesPerRow":1,"numberOfImagesPerCol":1,"groupsPerStrip":0,"borderRadius":0,"boxShadow":0,"gridStyle":1,"mobilePanorama":false,"placeGroupsLtr":true,"viewMode":"preview","thumbnailSpacings":4,"galleryThumbnailsAlignment":"bottom","isMasonry":false,"isAutoSlideshow":false,"slideshowLoop":false,"autoSlideshowInterval":4,"bottomInfoHeight":0,"titlePlacement":"SHOW_ON_THE_RIGHT","galleryTextAlign":"center","scrollSnap":false,"itemClick":"nothing","fullscreen":true,"videoPlay":"hover","scrollAnimation":"NO_EFFECT","slideAnimation":"SCROLL","scrollDirection":0,"scrollDuration":400,"overlayAnimation":"FADE_IN","arrowsPosition":0,"arrowsSize":23,"watermarkOpacity":40,"watermarkSize":40,"useWatermark":true,"watermarkDock":{"top":"auto","left":"auto","right":0,"bottom":0,"transform":"translate3d(0,0,0)"},"loadMoreAmount":"all","defaultShowInfoExpand":1,"allowLinkExpand":true,"expandInfoPosition":0,"allowFullscreenExpand":true,"fullscreenLoop":false,"galleryAlignExpand":"left","addToCartBorderWidth":1,"addToCartButtonText":"","slideshowInfoSize":200,"playButtonForAutoSlideShow":false,"allowSlideshowCounter":false,"hoveringBehaviour":"NEVER_SHOW","thumbnailSize":120,"magicLayoutSeed":1,"imageHoverAnimation":"NO_EFFECT","imagePlacementAnimation":"NO_EFFECT","calculateTextBoxWidthMode":"PERCENT","textBoxHeight":0,"textBoxWidth":200,"textBoxWidthPercent":50,"textImageSpace":10,"textBoxBorderRadius":0,"textBoxBorderWidth":0,"loadMoreButtonText":"","loadMoreButtonBorderWidth":1,"loadMoreButtonBorderRadius":0,"imageInfoType":"ATTACHED_BACKGROUND","itemBorderWidth":1,"itemBorderRadius":0,"itemEnableShadow":false,"itemShadowBlur":20,"itemShadowDirection":135,"itemShadowSize":10,"imageLoadingMode":"BLUR","expandAnimation":"NO_EFFECT","imageQuality":90,"usmToggle":false,"usm_a":0,"usm_r":0,"usm_t":0,"videoSound":false,"videoSpeed":"1","videoLoop":true,"jsonStyleParams":"","gallerySizeType":"px","gallerySizePx":940,"allowTitle":true,"allowContextMenu":true,"textsHorizontalPadding":-30,"itemBorderColor":{"value":"rgba(255,255,255,1)"},"showVideoPlayButton":true,"galleryLayout":2,"targetItemSize":940,"selectedLayout":"2|bottom|1|fill|true|0|true","layoutsVersion":2,"selectedLayoutV2":2,"isSlideshowFont":false,"externalInfoHeight":0,"externalInfoWidth":0.5},"container":{"width":940,"galleryWidth":972,"galleryHeight":0,"scrollBase":0,"height":null}}
1
23