I feel a bit ignorant having seen this trailer and not really knowing much about either the museum or the man behind it, Bobby Haas. Now I've looked into him he's described as a financier, who made a fortune out of soft drinks in the 1980s. This trailer is of a feature length documentary, funded, it appears, by Haas himself, or the museum, if there's a delineation between the two. Once Haas made his money, the story explains, he didn't chase more dough, but concentrated on be

Harley-Davidson's Milwaukee museum is a must-see for anyone with even a passing interest in motorcycles. It differs from Britain's national motorcycle museum by being properly curated, not just a collection of historic bikes. It's wonderfully designed and changes its displays on a regular basis. A current display shows century old photos and plans of the city's Juneau Ave factory. The site is still the company's global HQ, but is now used as offices, not an assembly factory, 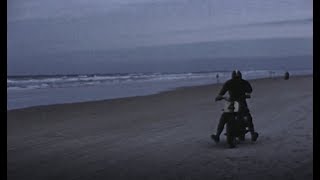 Lovely short compilation film made by the Harley-Davidson Museum from footage they were donated by the Andres family. Brad Andres was the youngest ever winner on the Daytona 200, and the film shows footage of when that race was still on the beach, shot by, the family think, Brad's mother. FURTHER READING We featured the 1960 Daytona 200 in SB3 #Daytona #HarleyDavidson #Museum #Beachracing #HarleyKR750 #1950s #1960s

I'm kicking myself for never visiting World of Speed on my numerous visits to Oregon. If you're an Oregon resident and haven't visited yet, maybe this weekend is the time. Our friends at See See are sponsoring a exhibition about Harleys that includes some historic racing stuff. Doors open at 9am on Saturday. #HarleyDavidson #Museum #SeeSeeMotorcycles #Oregon #Portland
1
2