Earlier this year I spent a day on a motorcycle event like none I've tried before. Organised by Past Tracks MC, the premise was to honour the skills and abilities needed to become a WW2 Armed Forces Despatch Rider, a role no longer required of course. Based at the fabulous Sammy Miller Motorcycle Museum in the New Forest, the day consisted of four tests. Riding skills - slow speed stuff round cones at a nearby mo'bike training school. Off road riding - a couple of miles on fo 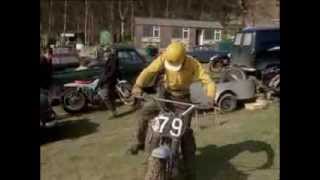 This might be the best piece of moving imagery you'll see all month. It was brought to our attention by Harley, in the Isle of Man who says, 'When MotoX was scrambles, protection while working on a lathe meant standing a bit further back, you could build a bike in three hours, garage decoration came in the form of centrefolds and two strokes sounded remarkably like four strokes…' Yep, the soundtrack is overdubbed with four-stroke engine noise. The Greeves factory is featured,
bottom of page