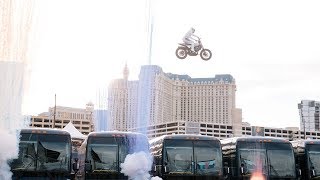 I'm not sure it was ever in much doubt, but then I was trying to jump 13 buses, 52 cars or a hotel forecourt, but Travis Pastrana cleared all three jumps - live on TV. The trio of stunts all emulated jumps attempted by Evel Knievel and the 34-year-old completed them all on a flat track spec Indian FTR750 - a massive coup for the brand - with it's minimal suspension travel. The bike was prepared by Cameron Brewer of Roland Sands Designs (whose racing kit we featured in SB27).

We shared the announcement that Travis Pastrana is going to repeat three of Evel Knievel's jumps, including the infamous Caesar's Palace fountains. Numerous stuntmen have attempted the Vegas jump, and there have been successes. The difference is, Pastrana will attempt all three on the same day, and he'll be doing it on a contemporary version of the bikes Knievel used. Pastrana has been supplied an Indian FTR750 and is using the same suspension the production flat track race b

Once of the blog's readers (who signed their name as Brrr) left this astute comment on the recent Travis Pastrana Caesars Palace post, so I thought it would be worth sharing... I'm very interested to see what kind of ramps Pastrana uses. As much as the bikes Evel used were crazy on their own, what made his jumps truly remarkable was the low wedge ramps he used. Six foot high , no transition/kicker [it looks more like 8 or 9ft, but the whole runway was raised off the floot to