We have a Secret Blend KTM 500 from Sydney, Australia in our STORIES section, owned and built by a KTM rally race engineer, Michael Carusi. He says... 'I’ve created a best-of-both-worlds flat tracker. The engine is a secret blend of SXF and EXC-F parts to produce a brand new powerplant that doesn’t exist anywhere else in the world. The forks and shock are WP factory items that aren’t available to the general public.' Check out the SECRET BLEND KTM 500 Photo: MachinesthatDream 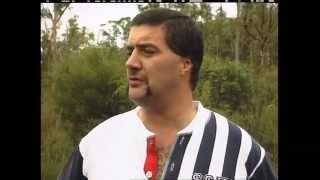 Off-topic Sunday This is without doubt the most deranged piece of news feature reporting I've ever seen. I didn't know anything about Brandon 'Chopper' Read before the film of his life, starring Eric Bana, was released in 2000 (a full 13 years before his death by cancer). There is some contention over how many of his stories are true, but it's undeniable he cut off his own ears to get out of a particular prison wing, so his other claims carry some weight. Anyway, watch it and

One day I'd love to make it out to one of these, but I fear I might die of dehydration just zipping my boots up . Get along and see the chooks take on the sliders. Organised by the southern hemisphere's number one flat track hearth throbs, the Jerkyls. Nepean forever! #Nepean #Jerkyls #Australia #SundaySlide

A collab between the Australian artist Paul McNeil and Deus Ex Machina, the Goof Bike lights up our life. It's a Suzuki RV90 with marmosethanger bars (not quite apehangers), an over-the-shoulder mini surfboard carrier and McNeil's own distinctive, naive primary paintjob. I need more McNeil in my life. #DeusExMachina #Suzuki #Minibikes #Australia
1
2