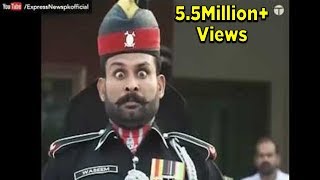 Closing Of The Border Ceremony

[Off-Topic Sunday on a Wednesday] It is the 70th anniversary of the partition of India, when the British Empire finally handed back the nation to its people, but, without going into it too deeply, still managed to cause a deep and hideously brutal outcome, by splitting the region into India and Pakistan, with Bangladesh to follow with its own independence in 1971. Because of Britain's huge involvement, the BBC news has been reporting from the region all week. The tension betw