Everyone's getting in on the riding inappropriate bikes on ice... #Iceracing #MotoGP #MarcMarquez #Honda 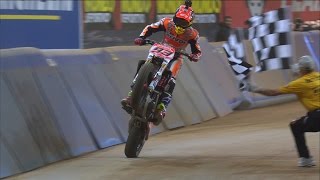 I explained how surprised I was that my cast iron tip for Baker to win the Superprestigio didn't come to fruition, well it seems there wasn't a level playing field, or so some paddock insiders believe. They say both Marquez and Elias (a former Honda MotoGP rider and Moto2 champ on a Honda-powered bike) had electronic traction control systems fitted to their HRC Honda CRF450s. They were the only two riders to beat Baker. Traction control is banned from all levels of flat track

Young DTRA racer Ollie Brindley posted a quicker lap time than Brad Baker in Friday night's Open Class class practice. Marc Marquez topped the Superprestigio class and was quickest overall, Ollie second quickest. Ollie has always qualified well at the big races, but hasn't always had the best luck in the races. He has made the grand final in the past. Contrary to what we posted the other days, the Fanschoice stream is for the US only. Motors TV are showing the live footage in
1
2